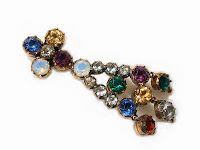 Contemporary jewelers look all around them in search of inspiration for their next collection. Not such a new thing according to jewelry historians. Before there was cyberspace to mesmermize the masses, there was---just plain space. Outer space and lots of it captivated the Victorian era populace who gazed heavenward in fascination over Halley's Comet which makes grand appearances every 75 years or so.

The Victorians were held spellbound by the stellar light shows from this periodic comet which made it's way across the nighttime skies in 1836 and then in the earliest part of the 20th century. Plenty of pins were fashioned to commemorate this occasion. Original and very inventive, these so-called Halley's Comet pins are still eye catching and intriguing to jewelry collectors and historians alike.
Email Post
Labels: Multi colored paste and opaline paste comet brooch set into gold with articulated tail. Circa 1840. English in origin. Courtesy The Three Graces: www.georgianjewelry.com