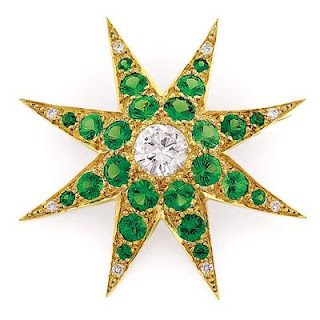 Gem lovers adore garnet for myriad reasons. Some of them include the richly saturated natural colors that garnet comes in, and for today's consumer au naturel is good, very good. Garnets have enjoyed popularity in jewelry for eons but it wasn't until the late 20th century that a new variety of brilliantly transparent kelly green garnet emerged on the global stage.

Enter Tsavorite garnet, a relative newcomer to the colorful lineup of garnet varieties. The British geologist who stumbled upon these pretty rare stones was in Kenya looking for something else entirely. Hollywood could not have developed a better script, although this real story might not have been believable.

Geologist Cambell R. Bridges accidentally tripped over potato-like lumps on the ground in which were embedded sparkly green bits. Green garnet is such a rare occurance, that only after gemological testing in a laboratory was it confirmed that he had literally bumped into the gemstone find of the era! These beauties were named Tsavorite, in a nod to the nearby Tsavo National Park in Kenya.

It's highly unlikely you'll find rough Tsavorite crystals over 5 carats, and all Tsavorite is to this day a rare treat. So when one spies a brilliant Tsavorite garnet and diamond star brooch like the one pictured here by Akiva Gil--you recognize a stellar accomplishment indeed.