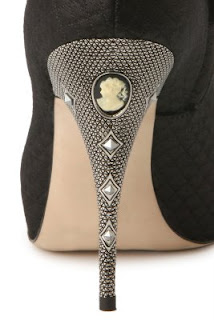 Mention the word cameo--and sometime back, the image of a little old lady adorned with a teensy carved pin came to mind. Well that was then--this is now.

Cameos are an ancient carved gem art-form predating recorded history. Stone, shell, even cave walls and rocks served as the canvas for carvers to convey their inner-most feelings. Early subject matter, especially as it appears on prehistoric rocks and walls simply showed what was going on in daily life of ancient peoples. Think of it as the first caveman 'tweet', answering twitter's question, "What are you doing?"
Today cameos are everywhere, and while they still most often take the form of jewelry in pendants, brooches, or earrings, they do show up in the most unlikely places. Designer cakes are embellished with a cameo motif. Even swanky Italian shoe maker Giuseppe Zanotti added the final touch to his chic black lady's boot with a delicate cameo. Natural fit--this one, since both topnotch leather goods and cameos are known to originate in Italy.
Edgy trendsetters like Seoul, Korea based jewelry designer Janice-K found ways to incorporate the timelessness of cameos into the most modern jewelry, proving that a savvy youthful market adores these beauties too.
There's more to learn about this ancient craft of cameo carving in Cameos Old & New 4th edition, by Gemstone Press.
Black Bootie image Courtesy: Zanotti Designs;
Email Post
Labels: boots cameo Janice-K luxury jewelry Zanotti