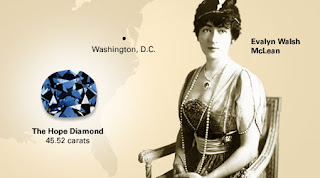 Few ladies past the age of twenty five would deign to bare all against the glare of an unforgiving camera lens. Being more like 350 years old, makes it completely out of the question. But one such aged natural beauty has done just that, to throngs of admirers who claim she’s as stunning as the day she was----cut. What?

If you agree with gem historians who keep track of these things, the legendary Hope Diamond came from a certain 112 + carat Golconda natural blue crystal. Famed 17th century gem trader Jean Baptiste Tavernier referred to this irregular triangular-like crudely cut diamond as a "beautiful violet." It got a bit of a shave in 1673 which whittled it down to 67+ carats and was thereafter known as the French Blue for some time. Oh its tale doesn’t end there—it’s just getting started. The blue stone got embroiled in that messy French affair with Marie Antoinette—looting ensued and Voila! It disappeared only to reemerge in the 19th century in the possession of a London diamantaire.

Considering the axiom that any publicity is good publicity–the Hope diamond earned its reputation as a true wild child. One of its owners, a quirky Washington socialite Evalyn Walsh McLean wore the Hope while gardening and used it as a collar for her dog. Eventually called ‘feared’ or worse, ‘cursed’ for the string of unfortunate mishaps befalling former owners, it’s in a safe house now—prohibited from anymore mischief making. Today the Hope resides in Washington DC’s Smithsonian National Museum of Natural History.

Since late September 2009 the Hope, un-mounted from its white diamond pendant setting went on public view completely bare for probably the last time ever. This unusual event commemorates the Hope Diamonds’ half century anniversary at the Smithsonian. Later it will have a spectacular new setting which was decided upon by votes cast online through the museum’s website offering three possibilities. The winning design is named Embracing Hope.