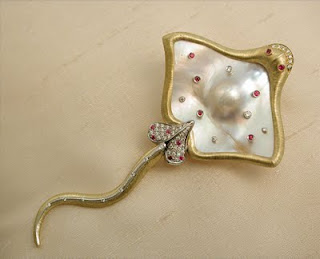 Designers often look to nature for inspiration in stimulating their distinct creative expression. Sometimes artists look to the gem itself for motivation in understanding what that gem wants to become. And on rare occasions both nature and the gem assists the jeweler in this mystical process.

Study the elegant freeform of the blister pearl. These intoxicating organic gems result when an invasive organism or an implanted nucleus attaches itself to the wall of the mollusk and grows into a semi-round orb. Unlike a complete pearl which has its entirety covered in nacreous material, a blister pearl has the pearlescence covering just the visible 'bump' of the pearl on the shell wall. This same iridescent material also covers the rest of the surrounding shell wall. When cut for jewelry purposes, the stirking blister pearls are left attached to part of the surrounding shell, and the resultant impression is one of a truly unique natural gemstone.
What to do with these spontaneous and cultivated pearl types? That answer lies sequestered in the fertile imagination of the designer who spies a blister pearl for the first time. Could there be a better design element for these sensual freeform gems than something that also hails from the ocean? Alishan Halebian does a splendid job with interpreting a lustrous saltwater blister pearl into an elegant stingray brooch, replete with bezel set and pave set diamonds and rubies in 18Kt yellow gold. He makes a few versions of this captivating sea creature, and of course like all natural creations, no two are ever exactly alike.
Halebian says he approaches design in various ways. The idea for his stingray brooch came from the blister pearl itself. The fluid motion, its waviness, and the natural undulating curves reminded him of the graceful flowing movements of a stingray in motion. "When you rotate the pearl," he notes, "it looks like you're actually seeing the stingray's movement." For this inspired designer, a precious gem will often give him direction, he claims. And by the looks if it, it's telling him a beautiful story.
18KT yellow gold, diamond, and ruby stingray brooch by Alishan Halebian. Image Courtesy: http://www.farlang.com/
Email Post
Labels: Alishan blister pearl diamonds Farlang golden pearls ruby stingray