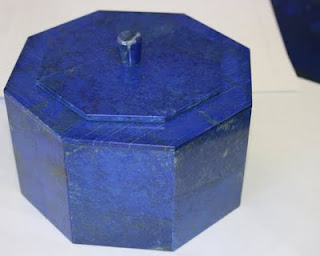 Richly saturated and cobalt blue--lapis lazuli has been around for a while, like 6,000 years if we were to pin it down. Its utility has always been more than as a gemstone, however. In prehistoric times it was a jewelry item, but by the Middle Ages, it was pulverized into an ultramarine artist's pigment and coveted even more. Palaces and cathedral walls in the Middle and Far East are paneled with massive slabs of lapis lazuli.

But we especially treasure lapis as a modern day gem, don't we? Deposits of this opaque stone are found in Russia, United States, Angola, Chile, Pakistan, even Canada. But the lapis acquired from the Hindu Kush mountains of Afghanistan is called the best in the world.
Ask Afghani gem expert Gary Bowersox, known as the Gem Hunter. For nearly 40 years, Bowersox has deftly trekked on foot or by donkey through this forbidding hot-spot in search of the finest hidden treasures in the region.
Feast your eyes on a remarkable solid lapis lazuli box Bowersox brought back from the 700 year old mine area at Sar-e-Sang Afghanistan. This is the same mine site where ancient Egyptian pharaohs acquired their lapis, and you know they were picky. At 11 inches long, it is a marvellous example of what the world's best lapis looks like.
Photo Courtesy: The Gem Hunter www.gems-afghan.com/
Email Post
Labels: Afghanistan ancient mine Gary Bowersox gemstones Lapis lazuli luxury jewelry