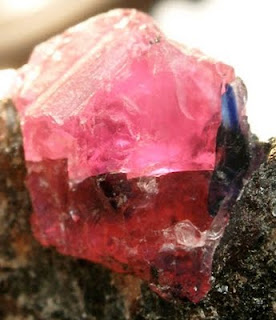 "You can't judge one by lookin' at the other, You can't judge a book by lookin' at its cover. " Willie Dixon wrote these lyrics that Bo Didley made famous.
Plenty of time you can't tell what's inside by what's outside. Except maybe in the case of Winza ruby. When you polish a stone you could remove the evidence of its origin determination. And other times that's not the case.
Winza rubies were a welcome addition to the gem market when Burmese stones were banned from sale in many regions because of Myanmar's cruel treatment of its citizens. Export of Madagascar's ruby went kaput too when their government put the brakes on all gemstone rough leaving the country.
When news of a high quality unheated ruby deposit in Winza, Tanzania spread a couple years back--it created a perfect storm.
A gemstone's origin is key its value and pricing, so it was critical to positively determine if a ruby crystal was from Winza. Soon experts were indentifying wispy hair-like needles in the Winza rough that were unique to Winza ruby. Although they have not determined what those inclusions are, they do mark the crystals as being from the Winza deposit exclusively.
Other indicators on these rubies are give-aways too. Look at the superb example of a Winza ruby crystal here. Gemstone cutters noticed 'blue streaking' on Winza rough crystals which is often not polished out because it is pervasive throughout the stone; another indicator of Winza ruby.
The crystal from Dr. Rob Lavinsky shows a Winza ruby with a clear cobalt blue streak on the right side. That's what we're talking about!
Winza Ruby rough crystal courtesy: www.irocks.com
Email Post
Labels: irocks ruby Tanzania Winza ruby