A-h-h! It's Emerald We Love 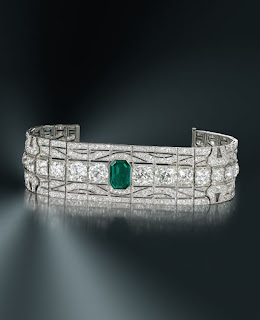 In the rarefied world of emerald---a precious and lively beryl variety, pedigree is everything. Looks are almost everything for these verdant sparklers, but their origin counts big time too.

All gemstone devotion to some degree boils down to personal preference. One collector likes a light stone, while another goes ga-ga for the same gem in its deepest most sultry hue.

With emerald, however, there's a consensus that the straight greens or the slightly bluish-greens are the more valuable. Likewise their origin weighs heavily on worth as well. Deposits abound in places like Zambia, Madagascar, Pakistan, India, Zimbabwe, Brazil and Russia. Yet the Colombian emerald is rated top of the heap for it's famed blue-green saturated hue and other quality components.

Owing to several natural occurrences and the way in which emerald's are recovered from the earth, hardly a one escapes unscathed. Emeralds are in fact so identified with their particular inclusions that they have a name for them, 'jardin' or garden in French, owing to their branchlike configurations--these inclusions resemble plants.

When spectacular emeralds come along, the cognoscenti know it and are likely to track them down. A recent Christie's London auction sold this masterful diamond and emerald Art Deco cuff bracelet for about twice it's highest estimate, roughly $217,000 US.