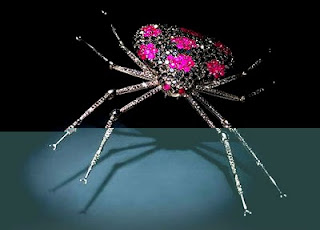 Yep, it's Tuesday, so this must be ruby.

Traditionally the most coveted ruby comes from Burma, called Myanmar today. There's more than just the name that makes this red rock reign. Burmese ruby is celebrated for its pigeon blood tint--sort of a bluish red if you can envision it. Large Burmese specimens are nearly impossible to obtain today, the larger and cleaner stones fetch a kings ransom.

So most ruby collectors look elsewhere for their red stones. Other deposits producing fine quality red corundum are Madagascar and the Winza region in Tanzania. But Thailand, Sri Lanka and other Asian locales seem to harbor a mother lode of ruby and much of it is traded and processed there.

Like any natural object, the geologic terrain indigenous to each locale factors prominently in the look of the stones. Experts can sometimes determine the origin of ruby from a visual inspection. The ruby may be opaque as some African specimens are. Crystals from the Winza region have telltale blue streaks, while other ruby seems so light toned, it's almost pink. No matter, ruby lovers collect it all.