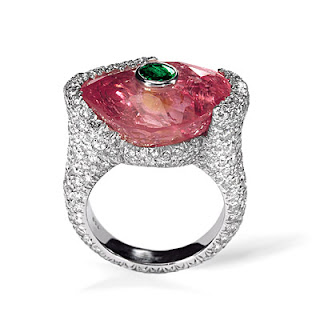 The science of separating one gem mineral from another is relatively recent in context to the many millennia that man has been collecting pretty stones.

Spinel (a magnesium aluminum oxide) forms in the same placer deposits as ruby in places like Burma where top ruby is found. So it's understandable that ancient spinel stones set in important jewelry were mistakenly called ruby. Even the older monikers like 'Balas Ruby' misleads those not familiar with this precious gem.

Only 150 years ago was this gem identified as a separate species from its look-a-like corundum, or ruby. And by 1910 using the Verneuil method of synthesizing, spinel was successfully created in the laboratory.

Still, the real deal is a real steal. Precious spinel has a widening throng of admirers who adore the myriad color nuances of this gem, lending an individual personality to this stone. The exquisite DeGrisogono pale red spinel ring shown here might be in fact a Balas Spinel. This variety of pale red spinels are named after a region in Afghanistan, and is a superb example of the ethereal tonal qualities found in naturally colored spinel.