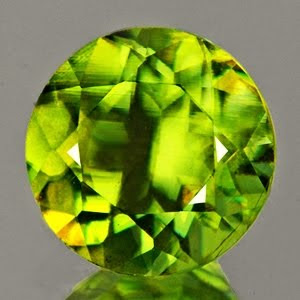 Interesting to examine, sphene, or Titanite to gem nerds is gaining momentum with the exotic gem crowd. It's got a lot going for it too, with its super adamantine luster and awesome dispersion.

The stone derives its weird to pronounce name from a Greek word for wedge. Truth is, sphene crystals often look like a pointed end wedge when found.

Look closer at the sphene shown here--fuzzy facet junctions you say? Well, yes. That's a function of the extreme double refraction, which causes the facets to appear blurry. The lovely sphene could be mistaken for another yellow-green beauty, peridot whose hardness rates 6.5-7. Sphene's hardness rates 5-5.5, and it's fiery scintilation distinguishes it.

Could all this sudden attention make a sphene blush? No, but heating it will. Heat treatment is routinely applied to colored stones to improve or change a gems' color for salability. Heating sphene could turn this sweetie into a rosy orange hue. You could do it--but we like 'em au naturel, don't you?
Email Post
Labels: colored gemstone gemology peridot sphene