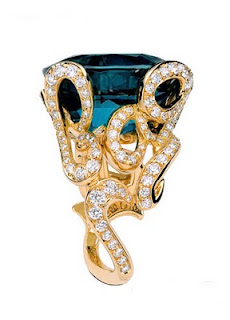 More than just a pretty face, the quintessentially chic tourmaline is the jewel of choice for top notch designers who prefer interesting tonal qualities in their featured gems. But digging a little deeper, one finds more to tourmaline than cover girl good looks.

Tourmaline is also piezoelectric. That means it exhibits electrical conductivity when pressure is applied. The crystal axes in this gem mineral have different properties at the opposite ends of the polar axis. If pressure is exerted at these ends, electricity can flow creating opposite positive and negative ends.
The military and aerospace industry know this. Tourmaline has been used in pressure gauges since World War II, when the blast pressure of the first atomic bomb was measured.
So if this gem of a jewel generates a dynamic response with you, just blame it on its p-i-e-z-o . . . oh never mind. Just enjoy it.
Dior tourmaline and diamond ring
Email Post
Labels: designer ring Dior green tourmaline luxury jewelry piezolelectricity