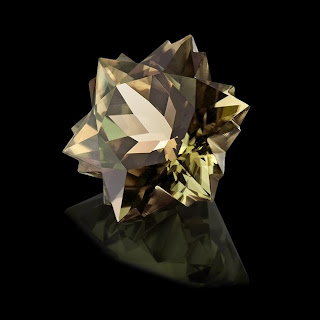 The art of gemstone cutting is a fascinating study. Every precious gem has its own type of fracturing, which is one of the ways we identify that stone. Surface breaks, called fractures can form in splintery, conchoidal (shell-like) or even breaks and so on.

The rare color-change Zultanite gem has a perfect cleavage and can completely break apart in one direction.

Gem cutters must learn the tendencies of each stone they cut in order to successfully shape the gem into the desired pattern. Imagine the task of cutters attempting to polish the gem quality diaspore, or Zultanite. They must master the stone in order not to shatter the crystal. Diamonds may lose between 40-60% of their original size when being polished. But Zultanite will lose up to a whopping 98% of its crystal before the cutting process is complete. No wonder large size finished goods are a rare occurrence.

There's more to every gemstone than just its sparkling glint. And there's more to the Zultanite than its pretty facets. This stone needs a master cutter to bring out its inner beauty and understand the tendency to completely shatter under the wrong touch. As with all phenomenal gemstones which change color in different lighting, Zultanite also needs an expert who understands crystal orientation to cut for its maximum color impression. Polishing this rare stone is such a difficult task, that it is profusely illustrated in gem writer Renee Newman's Exotic Gems Volume 1, just released at the recent Tucson GemFair.

Master cutter Rudi Wobito knows the intricacies with this gemstone material. His snowflake shown here shows off his expertise, and allows the gem to flaunt both its charming colors at the same time.