Getting Steamy with Topaz 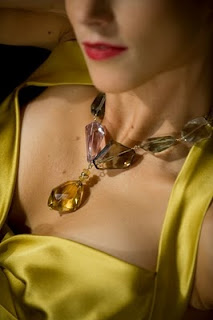 Topaz fans are legion. On many a colored stone collectors' short list, topaz ranks supreme. This ancient and very transparent gemstone likely owes its name to a derivative of a Sanskrit word for yellow fire.
In its pure form, this silicate mineral is colorless but various impurities in the mix can tint the mineral to nearly any shade of the rainbow.
VARIETIES
Yellow varieties of topaz are so coveted that each subtle nuance in shade acquires its own name for better identification. Imperial, Sherry, and Golden are a few terms which separate the yellow topaz variations.
Renowned 18th century gem trader Tavernier wrote about a giant topaz he saw weighing almost 158 carats. But there's more where that came from. Brazil is known for several boulder sized topaz deposits recovered from pegmatite weighing several hundred pounds.
RECOGNIZING TOPAZ
It shouldn't take long to separate authentic golden topaz from yellow quartz when they are examined together. Topaz has the more desirable higher ranking of 8 on the Mohs scale and proves denser in a specific gravity test. All this adds up to a high luster in the stone that takes a superior polish over similar colored gems.
DESIGNING WITH TOPAZ
Jewelry designer Caldwell Sutherland selects warm fiery toned topaz for her original necklace shown here because it draws the observers' eye toward the slow intense smolder in this warm stone. She chose golden topaz as the focal point of her bold and modern neck wear because "it drew my eye to it immediately" so she knew it would resonate with her clientele, who only collect what speaks to them personally.
Original necklace of smokey topaz, green amethyst, amethyst, citrine, rock crystal and an important golden topaz center stone $4,500. Courtesy: Caldwell Sutherland Designs
Email Post
Labels: Caldwell Sutherland golden topaz Topaz