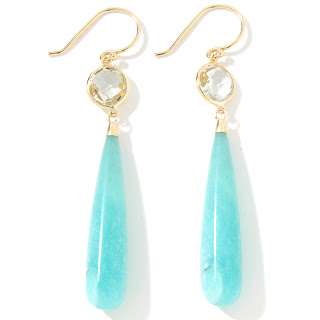 new bijoux. But they have no intention of skimping on style.
Those who know are opting for exotic jewelry with artistic gems that distinguish the wearer as a trendsetter not a follower. Is there such a thing as exotic gems that are both eye-catching and value priced today? Did we mention all natural too? Let's look at amazonite.
Amazonite is a wonderfully modern gemstone. The refreshing blue-green hue sets the stage for an updated spring look. Amazonite has actually been admired for thousands of years, however. Treasures unearthed in Egyptian tombs reveal that Pharaohs had a yen for this pretty stone and used it profusely along with other blue water-like gems such as lapis lazuli, and turquoise.
CHARACTERISTICS
This microcline feldspar often appears to have a schiller--or a shimmering effect, which is due to its crystal structure. It occurs in semi-transparent to opaque stones, and it's also distinguished by white mottling of albite running through the stone. These traits help make each crystal unique.
Exotic--yes it is. Amazonite is actually somewhat rare in that its occurrence is not as pervasive as other colored gems. When we think of rare gems, we imagine those discovered in far away places. Amazonite used to be found in remote Russian deposits. But today, this stone is mined elsewhere. 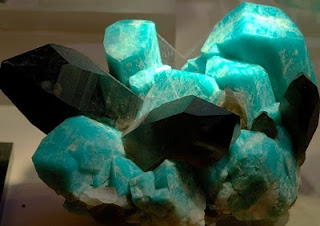 You may be surprised to learn where some of the highest quality crystals of amazonite are found today. No, it's not on amazon dot com. Good guess though. Its high atop Pike's Peak in Colorado. Those deposits may also have smoky quartz crystals ingrown amongst a large deposit of amazonite, as shown in the image here.
HOW THE ARTIST INTERPRETS AMAZONITE
Carol Brodie for Rarities Fine Jewelry features slender amazonite dangle earrings in sophisticated proportions with prasiolite accents that offer a chic counterpoint. These smart looking earrings go from bistro to beach and back to the boardroom.
Amazonite, prasiolite and 10K gold earrings Courtesy: Carol Brodie for Rarities Fine Jewelry
Crystal of Amazonite and Smoky Quartz Courtesy: Eric Hunt
Email Post
Labels: Amazonite Carol Brodie colored gemstone Rarities Fine Jewelry