Blue Beryl From a Beautiful Era 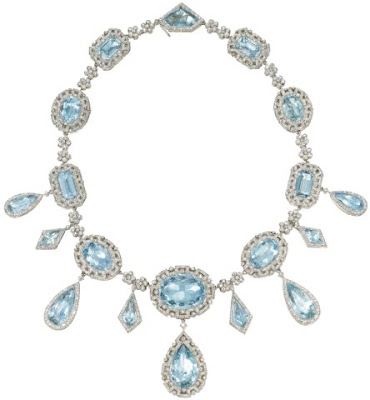 The species beryl produces precious gems in bright colors that have wowed jewelry fans for centuries. Emerald, the verdant beryl is treasured not only for its lively green hues, but because so little of these stones emerge from mining without their identifying inclusions, making them all the more collectible.

But the blue beryl variety, aquamarine, often boasts a clarity to flaunt. And its crystals, usually shaped in long tubular rough can get massive. Seems like the largest gemmy aquamarine rough found early in the 20th century weighed a whopping 243 pounds. We don't count other aquamarine deposits that weighed a 'few' tons, because those discoveries yielded opaque grayish crystals. Makes you wonder when they will find those behemoth treasures in a transparent sea foam blue. Things that make you go 'Um-m-m.'
Designers favor aquamarine for its almost endless incarnations. Semi-transparent aqua is cut en cabochon, or more lately, fashioned into chic jewelry with aqua in its original crystal shape for truly one-off designs. Some aquamarine appears with mysterious fine tubular inclusions, like hollow rods. These can on occasion allow a cat's eye effect to appear when cut if the tube-like inclusions are oriented in a particular way during cutting.
The finest aquamarine, collectors say, is a saturated darker blue, and of course very transparent. This quality aqua is often polished in some form of step cut--the ultimate showcase for flaunting very clean crystals.
Recently at auction with Christie's London came an extraordinarily superb aquamarine item. Not one stone, but a constellation of pristine aquamarines exquisitely matched to each other. This Belle Epoque (the Beautiful Era from late 19th century until World War I) aquamarine necklace circa 1905 with a clasp signed Koch, went to sale with a pre-auction estimate of between 25,000 and 35,000 British pounds. However, connoisseurs recognise when a good thing comes along. The hammer finally went down at 145,000 British pounds, or $209,886 to a very happy private Asian bidder at Christie's London very successful June auction.
Christie's Images Ltd, 2010
Email Post
Labels: Aquamarine Belle Epoque Christies Sale