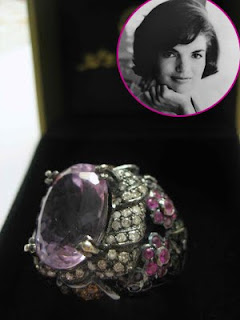 Spodumene is a lithium aluminum inosilicate. The transparent mineral occurs in yellow, or even a yellowish green similar to lively emerald.

But the lilac or purplish pink variety discovered in 1902 was named after the father of modern gemology, George Frederick Kunz, who was Tiffany & Company's resident gemologist at the beginning of the 21st century.

To this day, it's still somewhat of a collector's item; something the jewelry buying public is not often knowledgeable about.

All jewelry gifts carry with them a transcendent sentimentality. The recipient can but look at the gift and recall the thoughtfulness of the giver time and again. One wonders if Jacqueline Kennedy Onassis treasured her kunzite ring all the more because of the giver and when she received it.

In 1963 President John Kennedy secretly purchased an artful 47 carat kunzite ring accented with diamonds right before he and Jackie went to Dallas in November. It was to be his last precious gift to her. In the weeks following his assasination, someone close to the president remembered the ring in waiting at the Washington, DC jeweler--and gave it to her explaining that it had been purchased as a surprise Christmas present.

Mrs. Kennedy Onassis kept the kunzite ring for the rest of her life. In 1996 much of her private possessions were auctioned off, including this very precious and sentimental ring, at a hammer price of $431,000 US.
Email Post
Labels: G F Kunz Jackie Kennedy Kunzite