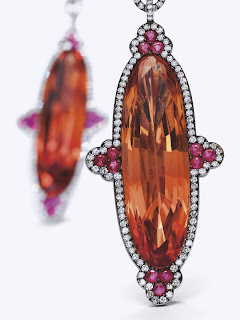 Special names make varieties of gemstone species easily recognizable, but they often reveal an important moment in time for that gems' pedigree.

Topaz is so old most ancient writings include at least mention of this erstwhile sparkly stone. Romantic stories tell of myriad origins of the word Topaz, and the derivative from the Sanskrit "fire" seems about as likely as any. One look at a well cut topaz reveals why; it blinds with dispersion and scintilation, garnering fanatical devotees along the way.

Imperial Topaz may have earned its epithet from the discovery of a tawny root beer colored topaz deposit in the 19th century along the Ural Mountains in Russia.

But Brazil is such an important source for classic Imperial topaz too, and they've been unearthing this interesting variety of topaz since the mid 18th century. They've had their own stash of royalty after the Portuguese royal family fled to Brazil when Napoleon I invaded Portugal. Whichever locale is the original namer of this intensely vibrant gemstone--the world owes a debt of thanks.

Imperial Topaz' hardness of 8 on the Mohs scale is the reason it can take such an exquisite high polish. Side by side, there'd be no question about which is topaz and which is madeira citrine--a lower hardness stone (7 on the Mohs) and thus less able to sparkle like a rock star.

Fans of world caliber Imperial can get their fix at Christie's October 20 Jewels Sale in New York. Up for bidding--the magnificent JAR Imperial Topaz, ruby, and diamond ear pendants--once the property of equally captivating actress Ellen Barkin. Remember the stir her baubles caused when they went to the block in 2006? Well here's your chance, they're coming around again and you're not likely to get another opp for these. Estimates range between $300,000-$500,000 US.