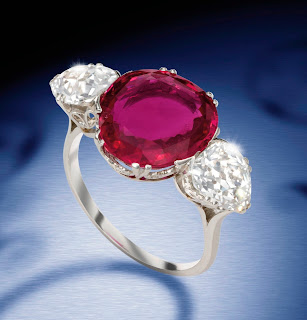 Christie's London reports the sale of a magnificent 9.20 carat Burmese ruby ring set in platinum with pear shaped diamond shoulders c.1910, today for the equivalent of  $3,375,353 US. Part of the Portland Collection, this ring belonged to Winifred the Duchess of Portland.
She was renowned for her many outstanding jewels and wore lots of them together, a signature which was captured in her full length portrait  painted by famed artist John Singer Sargent.

As with many of her sensational jewels, this ring was created for her by royal jewellers Garrard & Co., of London. Same jeweller who created the engagement ring of Kate Middleton, fiancee of Prince William. Her sapphire ring originally belonged to William's mother, the late Princess Diana. 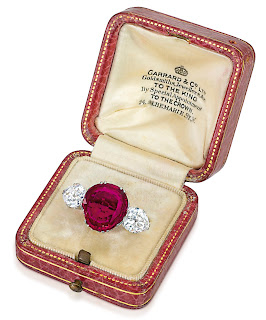 Notice the unusual pavilion of the ruby as seen through the table facet of this ring. It looks flat--and is just that.
This indicates that the ring was likely assembled from gemstones used in another jewelry item previously. It was and still is common for royals to recreate new pieces of jewelry from gemstones they already own set in other items.
The flat pavilion suggests that this precious ruby may have originally been set in a tiara or crown.
The ruby ring topped the list of purchase prices realised for the dazzling jewels of Portland  collection at this extraordinary sale, and it nearly quadrupled its pre-auction estimate.
Keith Penton, Head of Jewels, Christie's London, remarked, "This auction highlights Christie's longstanding tradition of selling the most important royal, aristocratic and historic jewels."