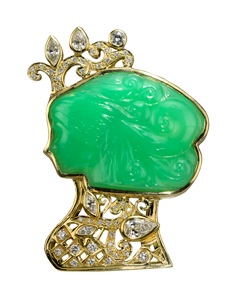 With the success of 'exotic' gem trading at the recent gem shows in Tucson, it's good to take a second look at an appealing yet often overlooked exotic stone, chrysoprase. Depending on where this gem is discussed, it may also be spelled chrysophrase or chysoprasus or chryzopraz.

This gem mineral is formed in the same way as other more well known cryptocrystalline silica family members; agate, carnelian and onyx. The crystals are so minute that they cannot be separately distinguished under normal magnification strengths. 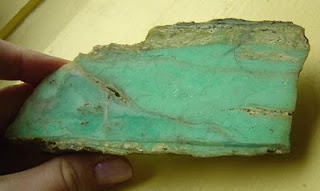 It owes a nod of thanks to nickel of all things for its coloration, not chromium as some mineral fans might think. Chromium? There's an app for that, and it's called chrome chalcedony. Just thought you'd like it all sorted out for you. You're welcome.

Gem carver Thomas McPhee cut a graceful gal in chrysophrase as seen at top. The enchanting and ultra feminine carving was then skillfully transformed into a beautiful piece of jewelry thanks to the creativity of designer Paula Crevoshay.