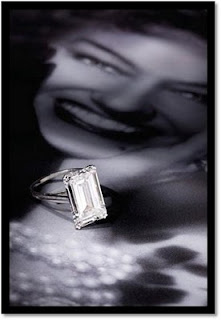 Long ago in a far away kingdom called HollywoodLand, yes it was called that, glamorous movie stars lived  to thrill their adoring host of fans. Early stars wore sumptuous gowns and extravagant jewelry in the movies they were in. 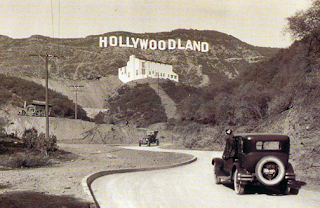 Screen legends Joan Crawford loved her colored stone jewels, and ice skating star Sonja Henie gathered up diamonds like they were ice cubes. Silent film star and highest paid actress of her day, Gloria Swanson swathed herself in jaw-dropping baubles looking every inch the celebrity. In those days the jewels in film were real, not look-alikes from the wardrobe department like modern actresses wear today.

That extra bit of reality was not lost on movie goers--especially during the Great Depression. Movies provided a welcome respite from the unrelenting drudgery of the 1930s when meals were planned around government rations, or worse yet, nothing at all.

Gloria Swanson's 5.1 carat diamond ring pictured at the top will go to the auction block on May 23rd, 2011 at Christies Paris.

"Her studio contract required her to wear the latest clothes and jewelry whenever she appeared in public, at her own expense. Gloria hardly needed this incentive because of her extravagant taste in jewelry. She wore so much expensive jewelry that she had to rent it. One says that her annual jewelry budget was $500,000. Gloria Swanson is sometimes credited with starting the fashion for wearing colorful jewelry," reports Christies Paris.
Image Courtesy Christies Paris
Email Post
Labels: black diamond Christies Paris colored gemstone Gloria Swanson silent screen star