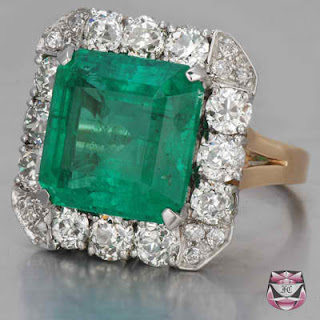 May babies enjoy their birthstone all year long; its emerald, that verdant jewel adored for centuries. If you love it too, take a number behind historical figures who avidly collected this ancient stone, like Indian maharajahs. Turkish sultan's regard for the stone is evidenced in their prized emeralds displayed at Istanbul's Topkapi Palace.

Indeed, some of the oldest emerald deposits ever recorded were found near Egypt's Red Sea. These were mined 2,000 years BC and came to be known as Cleopatra's Mines. She was an ardent collector of these jewels and peridot, another green stone.

Geologists are able to determine the age of emeralds, like those ancient specimens found in Zimbabwe. They claim that they were developing 2600 million years ago. Crystals found in Pakistan, considered the new kids on the block, are a mere 9 million years young.

Transparent emeralds reveal a lot about their genesis if we know what to look for. Besides their naturally occurring fissures, excuse me, that would be jardin, there appears naturally occurring gas bubbles, minute crystals of other material, and liquid filled spaces, sometimes occupying the same gemstone.

Emeralds are a lively gemstone requiring deep scrutiny to learn their complete story. The fascinating part for collectors, of course, is that  each emerald truly has its distinct traits that make each stone one of a kind.

Look deeply May babies---see what's in your birthstone.

The regal 17.38ct emerald ring accented with Old Miner and European cut diamonds shown is a marvelous example of those Art Deco era jewels acquired by the upper class. From that time period, serious collectors wore superb examples of precious gemstones  in impressive sizes. Today, it takes some doing to find emeralds of such transparency, color and quality in that size.