Such a pretty face. And so young. The green grossular garnet we know as Tsavorite is a rather new discovery in the gem world. We think of garnet as red mostly. And the lively verdant garnets from the windswept bushland of East Africa's Kenya-Tanzania border were first randomly discovered in the latter part of the 20th century.

True, British geologist Campbell Bridges was on the trail of gemstones in 1967. But the odd lumps of earth bearing green sparkly bits threw him off. There had rarely been a sighting of green garnet, and never in the quantity that he would eventually find.

New gems are not all that common and when they are as dazzling at these colorful jewels, their fans are legion. This elegant gemstone packs all the pure green that emerald fans could ever dream of. What is doesn't have you don't want. And that's fractures. We adore emeralds so much, we forgive them for having so many natural fracture-like inclusions we've knicknamed them jardin as they look like branches growing.
Tsavorite stones appear wonderfully absent of those hard-to-mask inclusions that plague emeralds. They are a completely natural beauty to boot. No enhancements on these lovelies. The crystals take a magnificent polish and that contributes to their jaw dropping brilliance.

Take a look at them in their natural state, at the mine site. 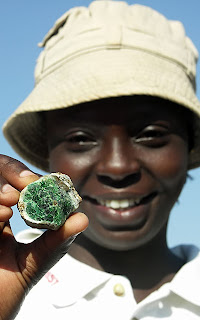 The imaginative designer Yael pays homage to the majesty of these precious stones from far away Kenya. His stylish tsavorite bracelet seen at the top revels in well-matched stones carefully assembled to create a masterful tribute to these exotic treasures. Had not Bridges stumbled upon those peculiar lumps of earth bearing green garnets, the world would have one less miracle to admire.