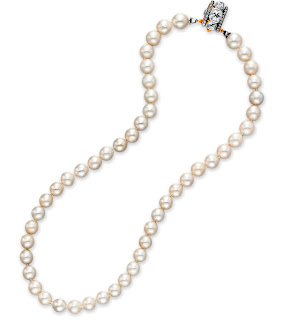 Christie's released results from their Tuesday October 18, 2011 Manhattan auction. The New York Magnificent Jewels lived up to its name. Amongst the 177 lots offered were the much lauded Vivid Yellow pear shaped diamond, all 32.77 carats of it. An annonymous buyer paid over $6.5 million dollars for the yummy sun drop stone.

In fact, the gems were so sensational, one of the more demure items may have had its thunder stolen from it. It should not be overlooked. Listed as "a natural pearl and diamond strand necklace of forty-nine graduated natural pearls found its joyful buyer paid 10 times the pre-sale estimate. Going to Middle East Trade the results list stated.

The estimate placed these pristine baubles at $100 thousand dollars, but the buyer knew he had the pearls of great price shelling out $1,058,500 for the lustrous orbs. 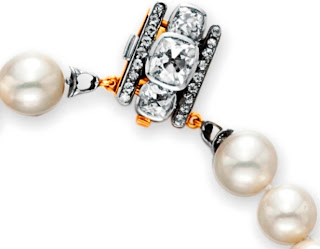 Notice the close up on the clasp; helping one to identify the age in which it was made. The well cut diamonds with the open culet and an Old Miner's squarish shape date the piece to the era when all pearls were natural.
Pearl collectors with a yen for the real deal -- natural pearls--must scour the fine auction houses of the world in search of these beauties. A century back, when Japan's Mikimoto began successfully culturing pearls,  natural pearls became a thing of the past. Today,except for auction houses one might never gaze at a single pearl that was the rare and random result of nature.

A natural pearl is substantially heftier than it's cultured counterpart. A natural pearl is pure nacre, except for a tiny irritant at its center which started the whole process of layering smooth nacre over foreign matter.
Cultured pearls were helped along with the surgically precise insertion of a nucleus bead, thus insuring that the mollusk would develop a pearly globe within.