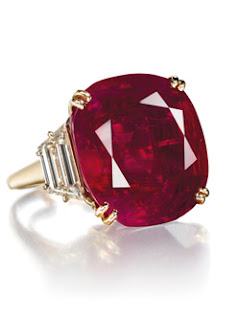 Stirring things up recently at auction was a sensational ruby ring. It was part of philanthropist Lily Safra's personal jewelry collection that went to sale at Christie's with proceeds benefiting charities she supports.

Long considered to be the most coveted ruby anywhere, Burma (now called Myanmar) rubies are revered for their vivid red color, often referred to as pigeon blood red. Ruby mining in Burma dates back over 500 years. The epicenter for top quality ruby rough lies in the northern Burmese regions of Moguk and Mong Hsu.

The fabulous crimson jewel topped all expectations by selling for $6.7 million dollars US. The price sets a world record for a ruby at auction, working out to  $210,000 US per carat.

Sign of the times that collectors are in a robust frame of mind again? Looks like it. Christie's explains that the sale broke multiple world records, including achieving 100% sold by lot and value at the "Jewels of Hope" sale. Bravo.