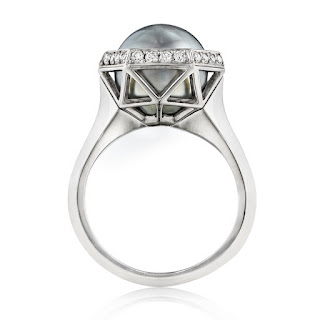 Some designers feel as strongly about the gemstone, as they do about the entire design. In this case a lustrous black cultured Tahitian pearl is given special treatment in a designer ring. Is it cradled in the mounting? Or is it held captive by an intricate network of gleaming white gold and diamonds?

A closer look at French native and jewelry artist Nathalie Leseine would reveal the depth of her love for these exotic marine gems. She spent time living in French Polynesia to be closer to the natural treasures, learning all about Tahitian pearl farming and what makes them unique in the pearl world.

Tahitian black pearls are actually produced in a range of deep hues with dramatic overtones of other colors like blue, green and pink. Their natural colors are influenced by the temperature of the deep marine waters where they form. The plankton they feed on in the lagoons and of course the oyster itself all lend a hand in affecting the range of colors for these sumptuously smooth orbs that are coveted the world over.

Can you perhaps see homage paid to the majestic Eiffel Tower in Paris in the architecture of this creative setting? Leseine's childhood home was Paris. Like many imaginative designs from inventive jewelry artists, she hides a bit of herself in every item she creates.