We love transparent clean gemstones, and nature provides several varieties for us to collect. Green beryl, emerald which is also a beryl, tourmaline and demantoid garnet are just some of the verdant stones we crave.

A lesser well known but equally yummy green gem is Hiddenite. See the fab butterfly's body in the image above? That would be Hiddenite, which under certain conditions can mimic emerald to the casual admirer. This cool jewel is a transparent green version of the mineral spodumene, first found in N.C. in the late 19th century. 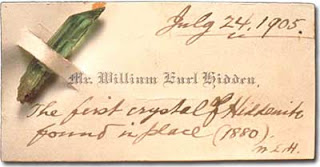 Named after William Hidden, the discovery in Alexander County, North Carolina in 1879 found its way to geologist Hidden who was on a mission at the behest of Thomas Edison to locate platinum in them thar hills. The sparklers made such a splash in the area they ended up naming the entire region Hiddenite. Since those early finds, the gem-mineral has been recovered from deposits in Brazil, Madagascar, and China. 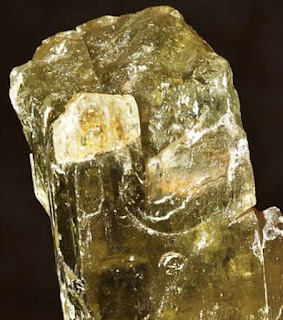 It is rarely found in completely colorless form, and a little more often discovered in a yellow to yellow-ish green crystal, according to early notes made by George Frederick Kunz, the father of modern gemology. "Sometimes an entire crystal has a uniform green color, but generally one end is yellow and the other green," he observed.


Modern jewelry fans are glad it was found at all, and continue to collect this exotic beauty for its clear green crystals, a trait that emerald lovers can rarely boast. You might pencil in a field trip to North Carolina as the hills still hold some of these beauties, and hobby mining is a robust pastime in that part of the country.