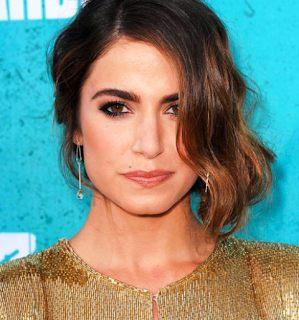 What better counterpoint to a sizzling hot dress on a Summer's night, that cool lemon quartz accessories?
What to Wear and Why
Here actress Nikki Reed, attending the 2012 MTV Movie Awards, at the Gibson Amphitheater in Universal City, CA completes her effortlessly chic look with slim dangle earrings featuring lemon quartz briolettes. 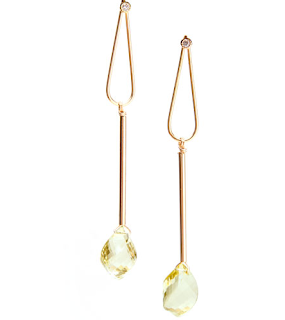 Separating Similar Colored Quartz
Citrine is also a yellow quartz but it has at least a little orange back color to heat up the tint. Lemon quartz is a cool lemon aid hue stone, and is wildly popular lately. The best of this cool looking gem comes from Brazil, and Africa; and crystals are often discovered in mammoth sized rough.

Cut Matters
The delicately toned jewels look chic set in either white or yellow metals.Since it is so pale, cutters and designers opt for clever cuts such as the briolette shown here since the stone will show its color better and sparkle plenty in the process when light reflects off each of these cris-cut shaped facets.