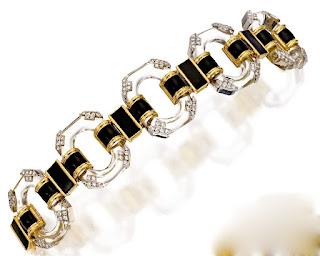 Platinum and yellow gold link bracelet with crystal quartz and diamonds. Courtesy Sotheby's
Long discovered but only popular for jewelry since the 20th century, platinum is the pinnacle of precious metals chosen for top-tier jewels worldwide. Beside the soft patina that emerges from normal wear of this white metal, there are lots of things you may not know about this lustrous choice.

Platinum is hypo-allergenic, making it a must-have for women whose earlobes can be super sensitive to any metal near the skin. It's also a much denser precious metal as contrasted to gold for instance. So couture designers know that their ring produced in platinum will have that coveted 'heft' that jewelry collectors crave. You know you're wearing a platinum piece . . . by the luxurious hefty feel of the item.

Famed jewelry houses like Tiffany, Cartier and Faberge were early adapters of this metal for their tony goods. But when World War II broke out, the US government declared this metal to be strategic for military use, and banned non-military application of platinum.

Prolific writer and gemologist Renee Newman recently released Gold, Platinum, Palladium, Silver & Other Jewelry Metals so consumers and tradespeople alike have one go-to source to contrast and compare the most popular metals used today in jewelry. In it one finds intriguing backstories about each metal she features. "Spanish Conquistadors were unable to appreciate the platinum they found in South America . . .they considered it a nuisance . . . and they derogatorily named it platina (little silver).

Today however, it's found its place of pride once again as the metal of prestige for important jewelry, and is often combined effectively in jewelry designs with yellow gold, and admired for the fact that its one of the purest (90-95% pure platinum) precious metals used in jewelry manufacture.
Email Post
Labels: 18K gold auction Couture jewelry designer jewelry diamond platinum rock crystal SOTHEBY'S