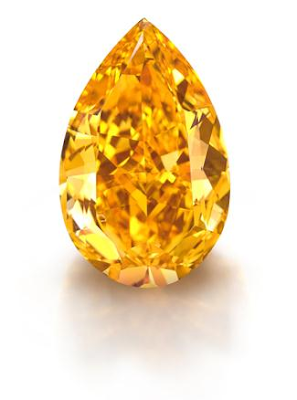 Naturally occurring diamonds in a straight orange hue are said to be the most rare of any diamond color. Because so few of these precious anomalies appear in nature, it's exceedingly difficult to study them. While some experts claim their coloration is indeed mysterious, others point to minute inclusions of manganese in their crystal structure as the source of the orange tint.

Previously, important orange diamonds of a few carats were fawned over and made into jewels ready to walk the red carpets. Now a sensational size orange diamond is about to make its public debut.

Its public appearance may come to an end as soon as the hammer at Christie's goes down signaling the last and highest bid for this spectacular jewel.