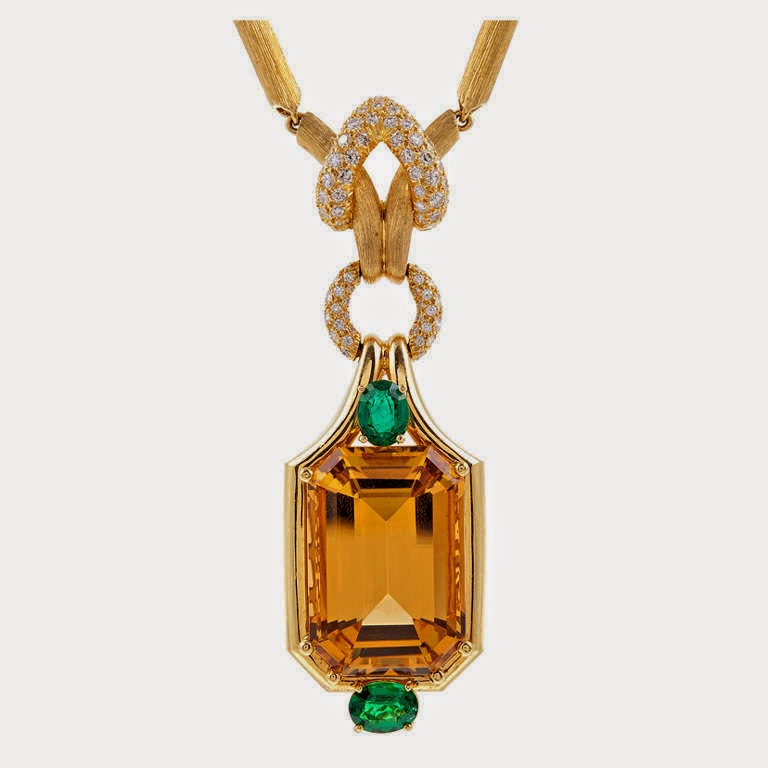 Clearly it's understandable why Citrine bears its fruity name. This quartz variety ranges in color from a cool pale yellow to  a bright lemony tint. . . and even lemon-lime on occasion to the deeply saturated orange-y hue seen here in a wonderfully important pendant necklace done up well by Henry Dunay.

This yellow gold neck piece spotlights an emerald cut citrine gemstone flanked by emeralds and accented with white diamonds for a spectacular effect.

This rich jewel was extremely en vogue during the Art Deco era. Between the 1920s to early 1940s, it wasn't really well known. And that increased its desirability. People fortunate enough to see these sparkly stones were enthralled by their bold color and exotic appeal. 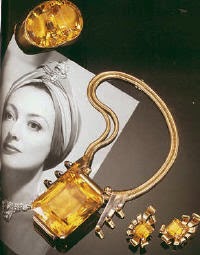 Mid 20th century film star Joan Crawford was known for wearing her own pricey jewelry in the films she made. Actually, that was a pretty common occurrence in those days.

Today however, the stars are wearing 'paste' or jewels that look like the real thing--and this done of course so that the sky's the limit on what can be used in movies and also as an insurance consideration.

The famous jewel suite pictured here belonging to Joan Crawford, was called topaz at that time. However they were actually an extravagant set of bright yellow citrine.

We think this stone  still has star power in the 21st century!
Email Post