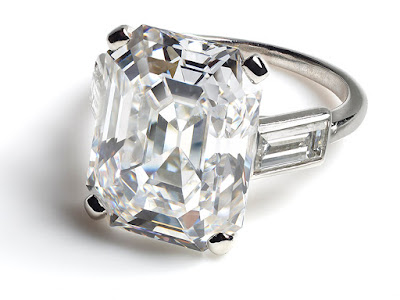 Yesterday, Today, and Forever
Why is it that certain things of beauty never fade away nor look dated?  Princess Grace of Monaco's iconic diamond engagement ring is one such perennially 'now' look. She was at the top of her game as an ultra-cool blonde movie star in 1956 when she met Monaco's Prince Rainier III who proposed after his 3rd meeting with her.

Ramping Things up Hollywood Style
It is said that Rainier had to do the hustle and up the carat size of his stupendous engagement ring after visiting her in Hollywood and seeing how American film royalty tossed around jumbo diamonds with panache. So he found a Cartier 10.47 ct emerald cut stone to rock her world. His original choice of a more simple diamond and ruby eternity band was not likely to seal the deal.


The Enduring Elegance of the Emerald Cut
Emerald cuts are as telling as they are beautiful. One would never dare to cut a low grade or low color stone into an emerald cut. This step-cut facet design is the sole domain of high quality diamonds. Contrasted to a conventional round brilliant cut diamond, with its 58 facets, the elegant emerald cut may have but 49 or 50 facets. Elongated step cut facets are likely to show any inclusions in the stone. The larger flat facets would also make it easier for lower colors to be viewed. So when  a diamond cut is into an emerald cut, especially true for large stones, you can bet it's a good 'un. 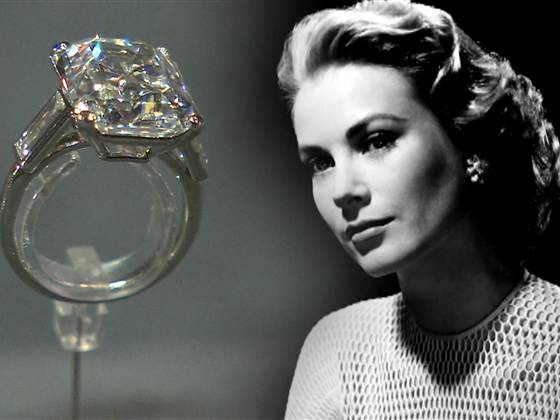 I'll Take it Today
When you consider that Graces' large platinum set emerald cut diamond ring with side baguettes  is still a classic come-hither jewel some 60 years after she first wore it---you understand how some things never go out of vogue. They  are simply too spectacularly designed to age at all.

Talk About Making a Grand Exit
Grace Kelly wore her diamond engagement ring on the set of her last film in 1956 called "High Society" right before she became Princess of Monaco.