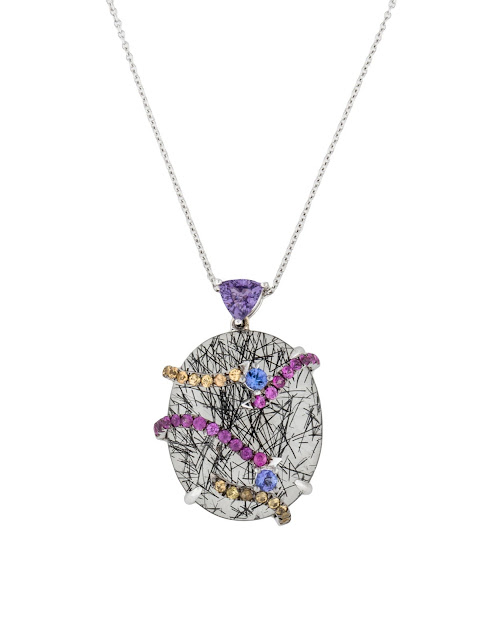 So you know about tourmaline, right? Good. And you've heard of rutilated something? Like rutilated quartz? Good, good. Those are gem mineral specimens which display rutile needles that were trapped inside the quartz crystal during its growth phase.

The interesting part of this anomaly is that the rutile inclusions always result in random arrangements; and often end up creating unique and mesmerizing patterns.

Tourmaline Threads
Some gem minerals are formed with these hypnotic inclusions made of tourmaline. Yep. Would I kid?
The tourmated stone--like quartz for instance will show these winsome inclusions to be very dark--almost black in tone. The tourmaline crystals grow in long rod like structures, usually thicker than rutile needles that populate rutilated quartz.

In the case of these exotic stones, its the interior interest that drives the love of the stone. Some designers don't do much at all with the stones. Others like the pendant you see here are carved into a symmetrical and pleasing shape and accented by colored sapphire and tanzanite.

The Main Thing
However an artist works the stone--or simply leaves it au naturel, the enigmatic tourmalated stone becomes the main attraction--mesmerizing viewers who learn these wispy threads are nature's artwork.