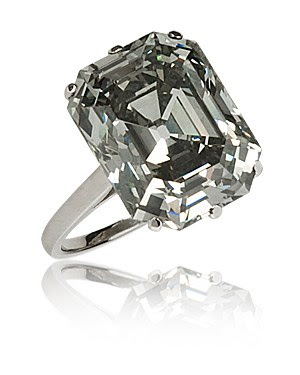 This overcast wintery day has me contemplating how many nuanced shades of grey appear in the sky and indeed all of nature. And the same can be said for diamonds. All fancy color diamonds bid us come hither with their distinctive allure. No two yellow or pink or even grey diamonds are exactly the same. They may share some similarities in tint but they are as individual as every human being.

The general population are becoming aware that genuine earth mined diamonds are produced in colors. That in large part is due to celebrities who flaunt them on the red carpet and boost their popularity.

What you may not be aware of is that grey is one of the rarest of this rare group of fancies. Yup. Grey--not so often discovered amongst this closed club of yummy rocks. Grey diamonds often get their coloration from slight additions to their carbon makeup ---if you can call it that---grey is NOT a 'color' now is it?


It appears that high concentrations of hydrogen in the composition can make the diamond crystal appear grey. In rare instances, boron is seen in the mix. Boron is what blue's the blue diamonds.


Their gradations of grey are expressed similarly to fancy color diamonds. When it comes to greys, here's the line up:

Got it? That was simple wasn't it? Notice there was no vivid grey or faint grey. Grey diamonds should not be confused with colorless diamonds that have many dark inclusions which also cause the stone to have an overall grey appearance. A true rare grey diamond can be relatively free of inclusions. It is the stone itself that has a grey body tone.
The above image of a famous De Beers diamond in a fancy grey tone. Notice how much more intense the grey appears than the emerald cut diamond shown at the top?

What about famous grey diamonds? Well, this is where it gets complicated. We've all seen a couple famous blue diamonds . . . we've ogled a couple famous pink diamonds> Even Queen Elizabeth has a yummy pink diamond that was an engagement gift when she was in her 20s.

But famous grey . . . well here's the sticky part. They are so rare that we can't locate any. However grey is often a modifier in other fancy color diamonds, like blue and violet.

I've turned up one teaser for you and it's not that good of an image. That's because the splendid stone was imaged in the late 60s. It's a 35.7ct cushion greyish-blue diamond; not straight grey. It was named The Sultan of Morocco and was sold to a private American collector. Off it went. Here's a glimpse however. 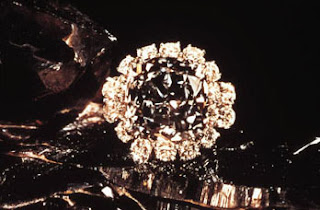 Now that I've whetted your appetite for these moody stones---you know how nearly impossible it is to find a straight grey. Worth the search, don't you think?
Email Post