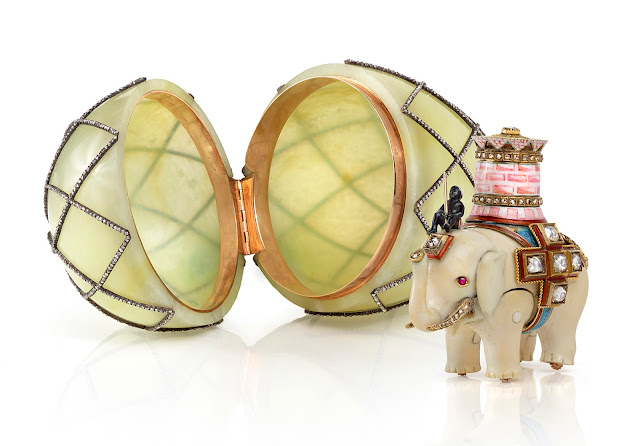 Easter for Russia's Imperial family in the late 19th century was both a deeply religious and a celebratory family season at the St. Petersberg Palace. Peter Carl Faberge earned the title of  jeweler to the Tsar for his unparalleled craftsmanship in all things bejeweled.

Every Easter gets an Easter Egg Surprise
He was especially celebrated for creating jeweled Easter egg gifts for the royal household, all of which had a 'surprise' hidden inside. The first Faberge jeweled egg was such a success that the Tsar commissioned them each and every year for members of his household. Faberge was tasked with the job of outdoing himself each Easter thereafter.

The egg you see above is thought to be one of the most expensive . . . at least the rarest egg of 50 such Easter jeweled surprises Faberge created before the fall the Romanovs to the Bolsheviks in 1917.

Where oh Where was Faberge's Hidden Treat?
For years the 'surprise' intended to be inside this egg was lost and actually unknown to exist anymore. Research done in 2015 revealed that the egg originally held an ivory and jewel encrusted elephant which has been in the collection of Queen Elizabeth II for many years.

A hint that lead to the connection between the empty egg and the tiny elephant was the discovery of the Faberge signature inside the pink tower sitting on the elephant. When the discovery was made known, the elephant was finally determined to be the original surprise inside this egg.  Her Majesty loaned the clever pachyderm to the Houston Museum of Natural History where the egg is being exhibited. It's the first time in almost a century that these two parts of Faberge's creation have once again been reunited. . . . and it feels so good.
Email Post
Labels: Easter Easter egg elephant Faberge JEWELS