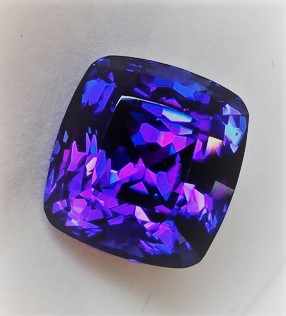 What You Don't Know
What you might not know is that the mineral zoisite---which is tanzanite's official designation, has been around for eons. But its previous discoveries were not gem quality nor were they this heart stopping blue violet we recognize.

Tanzanite is the branded name given to an extraordinary one-source gem quality transparent zoisite.
It enjoys an unusual distinction of being a relatively recent gemstone discovery. Most precious colored stones have been around for centuries.

But Tanzanite was discovered serendipitously in the mid 20th century--quite by accident the story goes. Prior to outside geologists rooting around in Africa, we learn that local Maasai tribes picked up pretty blue pebbles from the ground and treasured them for their natural beauty. They became adored gifts for women who had just given birth.

Where To Find It
This stunning blue violet stone is found in one region on the whole earth---the area around the foothills of the Merelani mountain ranges of Tanzania. How long will it still be available? Who knows--but some prognosticators call it the generational gemstone---meaning it could be mined out within our lifetime.

Different Colors --- Same Stone
The trait that appeals so much to many collectors is its pleochroic properties. Pleochroism is a mineral's physical property allowing it to display different colors when viewed from different directions. Tanzanite is sometimes straight blue; often with a violet backcolor. Some specimens have a pink wink--meaning that individual facets may flash a vivid pink hue. And that's the spectacular trait that collectors find irresistible. Pleochroism complicates matters for the cutter. That person has to decide which way to orient the stone prior to cutting so it will show everything it's got to its highest potential. Aren't you glad you're not responsible for that task? Cuz, we can't uncut a stone now, can we?

Loving tanzanite for it's intrinsic beauty and its secret life that winks a pink flash at us.
Email Post
Labels: pleochroism Tanzania tanzanite zoisite