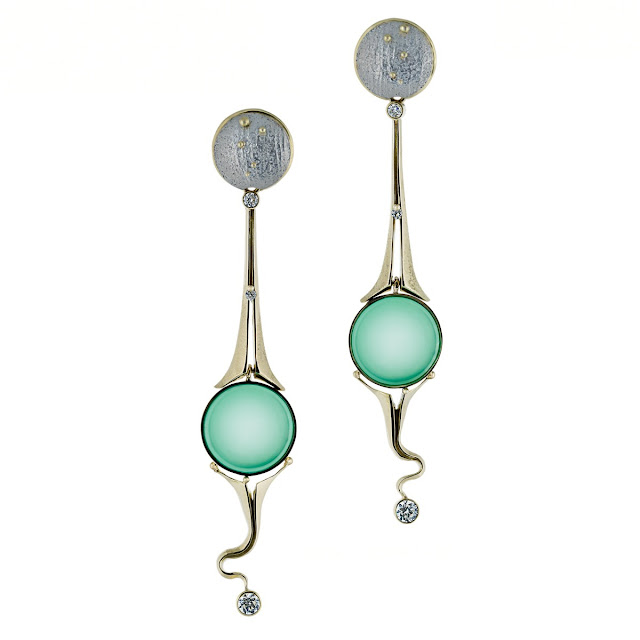 The Thrill of The Hunt
Ask any real gemstone lover. The big rush for a bonafide jewel connoisseur is in finding that rare jewel--those that haven't hit mainstream yet. For collectors, a good jewelry wardrobe is a thoughtful assemblage of pieces that convey  the wearers personal expression.

Look at chalcedony. Many enthusiasts have only a vague recollection of hearing about this elegant stone. It has been mined since ancient times, however. More recently it enjoyed popularity during the Art Deco era when other opaque to semi-transparent stones were also in vogue.

Chalcedony is a microcrystalline form of silica. This material is a type of quartz formed in such compact formation that the exterior of these crystals lack the rigid crystal structure typical of other gem minerals. Chalcedony has been discovered in a wide array of colors--some even show up as banded coloration. But the fresh green variety of chalcedony, also known as chrysoprase, gets its coloration from the inclusion of nickel oxide with spectacular results.

Richard Kimball
The featured earrings in this post are the inspired creativity of jewelry designer Richard Kimball. While he selected a glamorous green chalcedony stone as the hero in his limpid pendant earrings, he gave the stones another twist to add to the intrigue. His chalcedony stones were cut as lens; concave on both sides. This is an expert touch--because chalcedony is a semi-translucent stone when cut a certain way. Here you see the center becoming luminescent with a bit of light wafting through the stone.

Follow the Stone
Good jewelry has a story to tell. The designer can impart his or her personal aesthetic to an item which expands its desirability. Think about it. Someone somewhere dug up the stones knowing that another person would treasure them. The artist considers the way to interpret that same stone into an original art form. Later, the new owner of that finished piece selects the one that resonates with their sense of beauty and personal style. What a hunt!