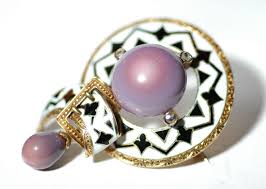 Modern women love pearls for their versatility. Wear them with jeans or an evening gown. So many varieties are available now that they have become a must-have in every woman's jewelry wardrobe.

There are certain criteria that elevate pearls to a rarefied strata: an even layer of nacre and thick distribution of that nacre across the surface of the pearl. The iridescence (nacre) and colorful overtones mark their desirability.

There is a rare pearl type that lacks a nacreous coating however. Its price rivals the most expensive pearls found anywhere. It's the quahog pearl. What? you say you've never heard of it? 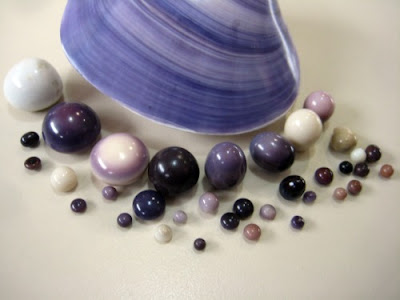 These home grown mollusks are made in America. Quahog pearls appear (but rarely so) in the hard shelled clam species of Mercenaria Mercenaria; found in coastal waters from the Gulf of St. Lawrence to the Gulf of Mexico. The species itself is quite common. But the pearls they produce not so much. Found in shades of white, beige or brown, Quahog pearls are also one of the only clam species in the world to produce lavender and purple varieties. They also tend to be found in small sizes--large examples are almost never discovered. This anomaly makes them highly collectible.

I don't know what made my mind wander to the elusive quahog pearl today. I was sitting here munching on some coffee-nut M&M's when the idea sort of came out of nowhere.

Nevertheless, whatever it was, it turned my attention to these mysterious orbs. They can exhibit a pleasing sheen. And some of the tones, like the lavender ones for instance are perennially sought after. They are largely unrecognized, making them the perfect mystery stone that can easily become passed over in a tag sale--which was exactly what happened with the stunning gold and enamel brooch above that flaunts a pair of quahog pearls. That priceless brooch (circa 1835) with its large quahogs was snapped up for a mere $14 by an eagle-eyed snooper at a costume jewelry sale.