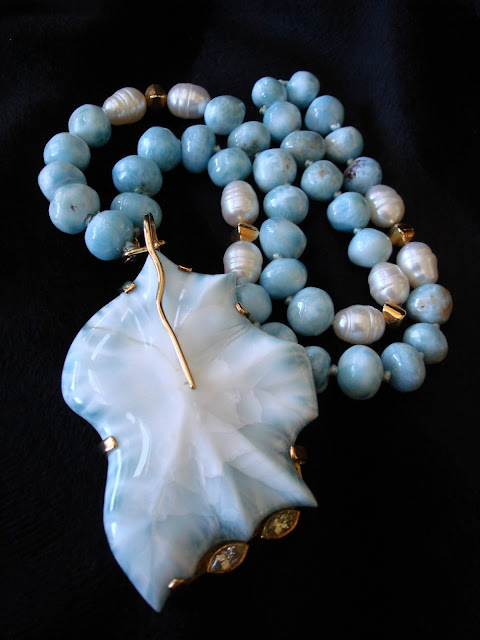 There are a few jewelry artisans whose work unfolds as a fusion of imagination, skill and respect for the natural material they work with. All natural gemstones are the handiwork of God whether they are minerals--like diamonds, or even organic, like pearls and amber.

No two are alike. And it's said that people gravitate to certain stones or jewelry items because it 'speaks to them'. We can't help but consider this when looking at the original artistry of Helen Serras -Herman.

Allure of Larimar
The necklace with its hero pendant is one such wonder. Named Marine Ray, it pays homage to the limpid grace of the stingray. The natural gem chosen for this work is Larimar; a rare one-source blue opaque stone found only on the island nation of the Dominican Republic. 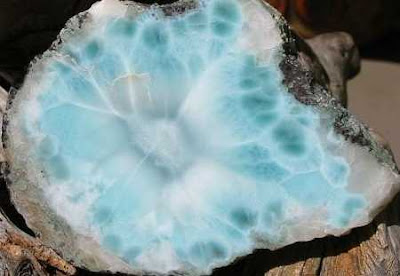 Larimar, a rock is composed largely of pectolite, an acid silicate hydrate. Generally pectolite can be found in many locations; but larimar is unique in its volcanic blue coloration, which occurs as a result of copper inclusions.

Working With Nature
Serras-Herman likes to work with a stone---not against its natural characteristics. "While carving larimar, my favorite pieces to start with are slabs that show the entire concentric growth pattern of larimar.," she explains. It's the naturally occurring variations that Serras-Herman believes adds to its appeal. "The varying shades of blue and white within the material offer unlimited design options when setting them into jewelry."


In Marine Ray shown here, she combines other gemstones that lend harmony to the entire work. Faceted blue or blue-green sapphire from Montana, grossular garnet, aquamarine, fire opal, plus pink tourmaline and pearls make for the accent stone choices frame some of her larimar designers. For artists like Serras-Herman, the finished work becomes an ensemble effort whereby the natural allure of the main stone informs the creative process. We sea that Helen!