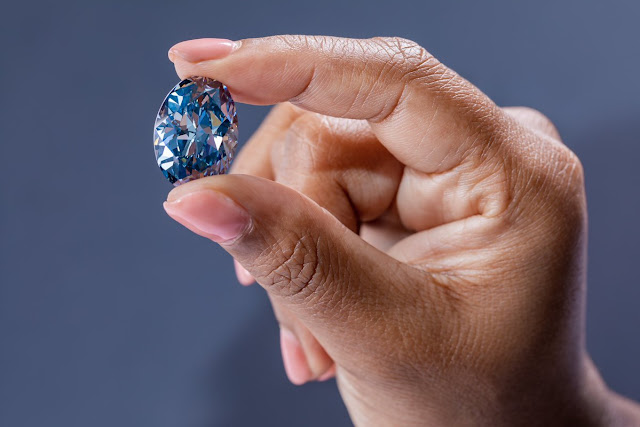 Records are made to be broken, the old yarn proclaims. We just never thought it could apply to the beloved Hope  Diamond--that fabled and mesmeric 45.55-ct cerulean stone.

The Original Blue Beauty
The Hope was likely cut down from a huge blue Golconda India stone called the Tavernier Blue after its original purchase in 1668 for French King Louis XIV. Full of history and some infamy it eventually landed in the National Museum of Natural History in Washington D.C. in 1968. Hyped,  jinxed or whatever, it was thought to be too cursed to sell to any modern owner.

Still, the Hope's hypnotic sway held diamond lovers in its reverie since the beginning.

Move over Hope
But. Now. There's another contender on the horizon. A magnificent Fancy Deep Blue (GIA's grading) diamond turned up in Botswana of all places. Well, not that diamonds aren't expected there, of course. But this huge azure rock stunned the most jaded of connoisseurs.

The Orapa mine (Okavango Diamond Co.) recently recovered the 41.11-ct rough which was then transformed into a 20.45-ct oval VVS2 masterpiece. If you're taking notes, the Hope was graded VS1, and labeled Fancy Dark Grayish-blue.

Just How Rare?
The new kid on the block was named Okavango Blue and is a rarity even in the fancy color diamond niche. "It is incredibly unusual for a stone of this color and nature to have come from Botswana, a once in a lifetime find, which is about as rare as a star in the Milky Way" says Marcus Ter Haar, MD of Okavango Diamond Company. 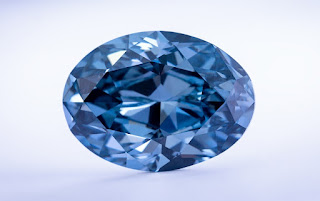 All this proves the earth has not yet given up all her treasures. .  and there are more left undisturbed deep beneath the surface waiting for their day. Never give up hope!
Email Post
Labels: blue diamond Botswana fancy blue diamond Hope diamond Okavango Blue