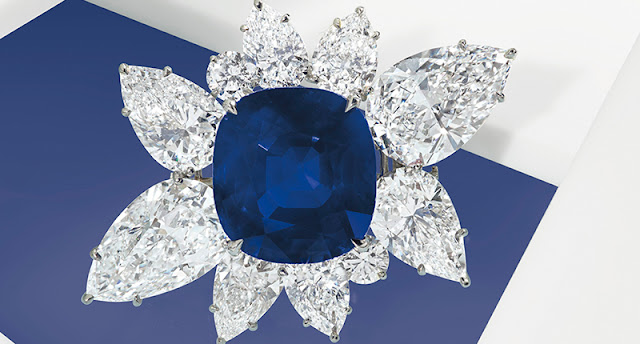 One's background plays a key role in social standing. Turn's out, the same concept is true when it comes to fancy gemstones. The origin of a stone is essential in placing it in that rarefied air of being most coveted (in part) because of its provenance.

Take sapphires for instance--I mean we'd all like to take sapphires, wouldn't we? The priciest have phenomenal color--and evenly distributed hues across the entire stone. Not too dark, not too light, it should also be as free as possible from distracting inclusions.

The cut matters too. It should be well proportioned, symmetrical, and the facets should do their job of handling light and reflecting it back to the eye of its admirer.

Rarity doesn't hurt either. The rarer the better is the frame of mind in gemstone circles.

That just about does it . . .  except for its background--the original source of discovery. Stones from certain locales are more desirable for different reasons. Maybe it's difficult to get to that area anymore. Or a natural occurrence prohibits access to the region. There are lots of reasons. But we've got as good an example as you'll ever want to see.

We're talking Kashmir Sapphire. High in the remote Himalayan Mountains lies an almost inaccessible area known as Kashmir. 19th century outsiders to the region encountered the legendary Kashmir sapphire, something already known to tribal communities living there for centuries. By the 20th century most of the mines were emptied out of their trove. Today few circulate, and mostly at auction. When they come to market, a bidding fever erupts.

What makes a Kashmir sapphire so desirable? Sapphires are found in a various regions of the globe, Ceylon, Madagascar produce some valuable crystals, and the USA gives up some exotic fancy colored sapphires as well.

But Kashmir sapphires are celebrated for their exquisite cornflower blue tint, and what gemologists say is a sleepy appearance--velvety for sure. Although highly transparent, minute silky inclusions typical of Kashmir rough lend that soft velvet impression.

Kashmir sapphires are often found covered in kaolin, a natural mineral that looks a bit like white clay.

Trouble is, these mythical stones are almost unicorns now--there simply are not many available. Those of high quality in large carat sizes are like a dream.

This week however, at Christie's Magnificent Jewels sale, one such stone having the right background made its way onto the block. A 43.10-carat Kashmir sapphire shown in the lead image up top was surrounded by icy white diamonds, and set in platinum.

The winner, winner, sapphire dinner? Harry Winston of course, a jeweler who knows a thing or two about priceless jewels. But there was a price when the hammer went down one last time. $6-Million, they said and worth every dollar they claim. Just thought you'd like to know.